The United States has begun evacuating its citizens from the quarantined Diamond Princess cruise ship, which has been docked at Japan’s Yokohama port for more than a week in a bid to contain the spread of the coronavirus.

Forty US nationals found to have been infected by the COVID-19 coronavirus will remain in Japan for treatment, a US health official said.

The evacuation came as the death toll in mainland China jumped past 1,600 and officials imposed a vehicle ban in Hubei province, where the virus originated in the capital. Wuhan.

Taiwan reported its first death from the disease while a newly-published speech revealed that Chinese President Xi Jinping was aware of the potential severity of the outbreak long before the public was informed.

Here are all the latest updates:

What can US evacuees from Japan cruise ship expect next?

US citizens being evacuated from the Diamond Princess cruise ship, docked at Yokohama in Japan, had a “no frills” journey ahead of them.

He explained that after having spent 10 days in quarantine on the ship, the US nationals who tested negative for the coronavirus will board a cargo plane to return to the US.

“They’ve been told that it will be cold, they should bundle up, they should bring their own food and for those with bags over 70 pounds, they’re told those bags will not make the trip,” Hendren said.

Once home, the evacuees will need to spend two more weeks in quarantine at military bases in California and Texas.

Forty US citizens on board cruise ship are infected: Health official

A senior US health official has said that more than 40 US nationals on the quarantined cruise ship in Japan have been infected with the deadly coronavirus.

“Forty of them have gotten infected,” Anthony Fauci, a senior official at the National Institutes for Health said on a CBS news programme. 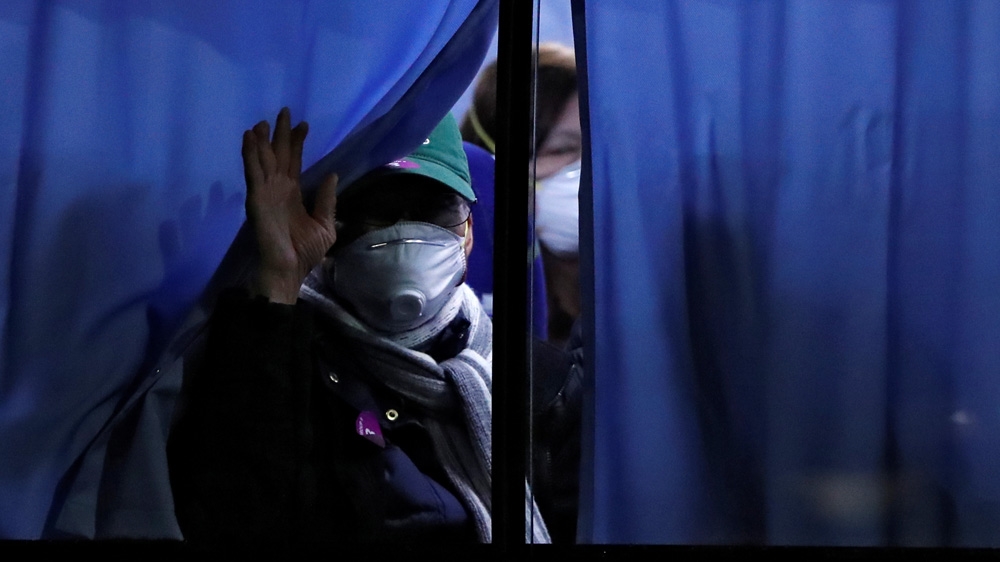 Passengers, believed to be US nationals, began to be evacuated from the cruise ship

The US Centers for Disease Control and Prevention (CDC) said on Saturday that 400 US nationals on the ship would be evacuated and flown back to the US.

But Fauci said those confirmed with infections would not be allowed to fly.

“They are not going to go anywhere,” he said, “They’re going to be in hospital in Japan.”

Three Israelis among those infected on cruise ship

Israel’s Ministry of Health has confirmed a third Israeli citizen onboard the quarantined Diamond Princess cruise ship docked at Yokohama in Japan as tested positive for the coronavirus.

The patients have been transferred to a medical centre in Japan and Israel will send an “expert physician to be in direct contact with relevant agencies in Japan and follow the patients’ case throughout the medical procedure,” the ministry said in an online statement.

A total of 355 people on the ship have tested positive for the virus.

More than 100 Germans released from quarantine

More than 100 German nationals have been released from quarantine at a military base near Frankfurt airport, two weeks after flying in from Wuhan.

“All the people concerned have been allowed to leave the quarantine zone and rejoin their families,” Thomas Gebhart, secretary of state for health told a press briefing.

None of the individuals in quarantine was infected with the virus.

About 100 people have called on Pakistan’s government to “bring back our children” from locked-down Hubei province at a demonstration in Karachi.

Pakistan’s government has so far ruled out evacuating the more than 1,000 Pakistani students in the province. Health Minister Zafar Mirza and others are due to hold a meeting for parents in Islamabad on Wednesday. 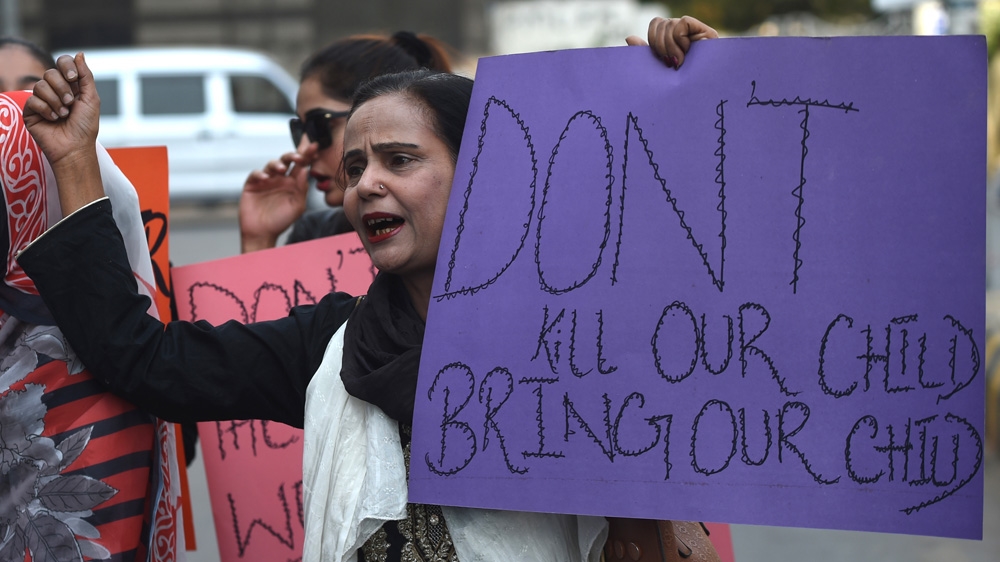 But many students and their families have expressed growing frustration as the death toll in China mounts, pointing to other countries, including neighbouring India and Bangladesh, that have evacuated their citizens.

“For God’s sake, we request from the government representatives please bring back our children, please listen to a mother’s grievance,” once protester said through tears.

The United Arab Emirates has confirmed its ninth case of coronavirus.

The country’s health ministry said in a Twitter post the patient was a 37-year-old Chinese national. It added the man was in a stable condition and was being monitored.

US passengers have began evacuating a cruise ship quarantined at Japan’s Yokohama, boarding a dozen buses at the port.

An AFP news agency reporter saw buses in a convoy starting to move away from the boat, though they did not immediately depart the port.

A passenger from the US, Sarah Arana, confirmed to AFP she had boarded a bus and was expecting to take one of two charter flights leaving for the United States.

Malaysia insisted it had correctly diagnosed coronavirus in an elderly US passenger from the Westerdam cruise ship despite all passengers having been given a clean bill of health when they disembarked in Cambodia.

The vessel was at sea for two weeks and barred from Japan, Guam, the Philippines, Taiwan and Thailand, until Cambodia – a staunch ally of Beijing – allowed the ship to dock Thursday in Sihanoukville. 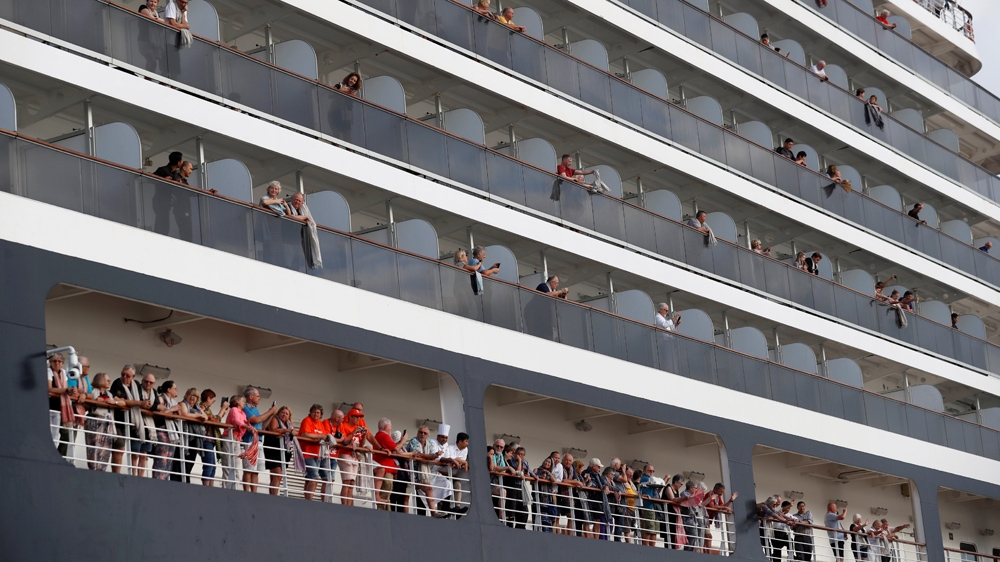 Passengers wave their towels as they prepared to leave MS Westerdam, a cruise ship that spent two weeks at sea after being turned away by five countries over fears that someone aboard might have the coronavirus

The first death due to COVID-19 has been reported in Taiwan, its health minister said.

The deceased was a taxi driver in his 60s and was hospitalised on February 3 due to shortness of breath, which led to a diagnosis of pneumonia. He died late on Saturday, Health and Welfare Minister Chen Shih-chung told a televised news conference.

According to Chen, one of the man’s family members also contracted the virus. While the man had not travelled abroad, he had previously transported people from China, Hong Kong and Macau.

Hundreds of demonstrators rallied for a second day in Hong Kong to protest against plans to turn some buildings into coronavirus quarantine centres, reviving anti-government protests in the Chinese-ruled city.

About 100 people braved rain in the New Territories district of Fo Tan, where authorities plan to use a newly built residential development that was subsidised by the government as a quarantine centre. Riot police stood by.

The Universal Studios Beijing theme park is expected to open to the public in May 2021 as scheduled despite the current coronavirus outbreak, a Beijing municipal official told a news briefing.

Construction of the theme park, the fifth such Universal Studios park in the world, is expected to be completed by the end of 2020, the official said. 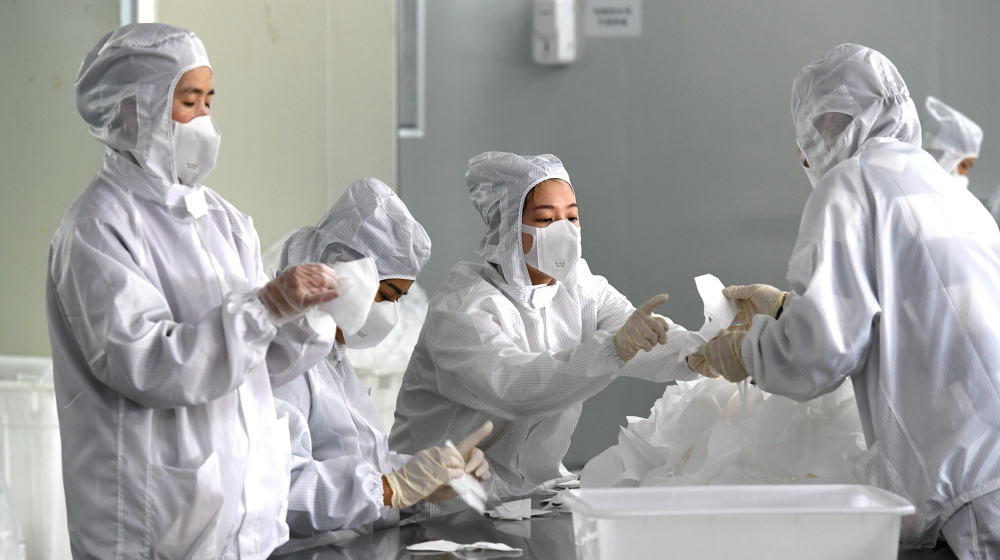 Workers on a production line manufacturing face masks at a factory in Fuzhou, Fujian province

The government of Hubei province, the centre of China’s coronavirus outbreak, said a ban will be imposed on vehicle traffic across the province to curb the spread of the virus.

In a published document, it said police cars, ambulances, vehicles carrying essential goods, or other vehicles related to public service would be exempted.

It added that the province will carry out regular health checks on all residents in the province. It also stated that companies cannot resume work without first receiving permission from the government.

Nepal has evacuated 175 of its nationals from the Chinese city of Wuhan, an official said, after protests by parents of students studying in the city.

A plane operated by state-owned Nepal Airlines carrying 134 men and 41 women, mostly students, landed at Kathmandu’s Tribhuvan International Airport before dawn, Health Ministry spokesman Mahendra Shrestha said. All evacuees will be held in quarantine for two weeks in the nearby town of Bhaktapur.

“They will be under the close observation of doctors in quarantine and will be allowed to join their families if found healthy after two weeks,” Shrestha told Reuters. 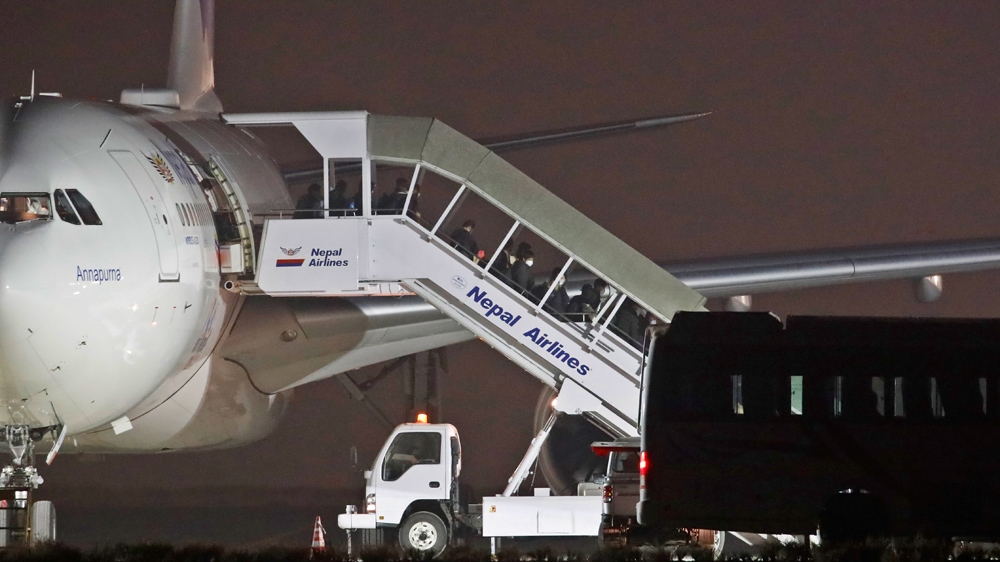 After Chinese President Xi Jinping played a seemingly muted public role in the early days of the coronavirus epidemic, state media published a speech Xi delivered on February 3 in which he said he gave instructions on fighting the virus as early as January 7.

The disclosure indicates top leaders were aware of the outbreak’s potential severity well before the public. It was not until late January that officials said the virus could spread between humans and public alarm began to rise.

In his speech, Xi also revealed that he ordered a lockdown of the virus epicentre: “On January 22, in light of the epidemic’s rapid spread and the challenges of prevention and control, I made a clear request that Hubei province implement comprehensive and stringent controls over the outflow of people.”

Another 70 people test positive for coronavirus on ship in Japan

Some 3,700 passengers and crew were on board the ship, where the most coronavirus infections outside China have occurred. Those testing positive are transferred to Japanese hospitals.

The Canadian government has chartered a plane to evacuate its citizens from the Diamond Princess cruise liner docked in Yokohama, Japan.

Canadian passengers who exhibit symptoms of the coronavirus infection will not be permitted to board the flight, however, the government said in a statement. They will instead be transferred to the Japanese healthcare system to receive appropriate care.

After arriving in Canada, the passengers will undergo 14 days of quarantine, it added. 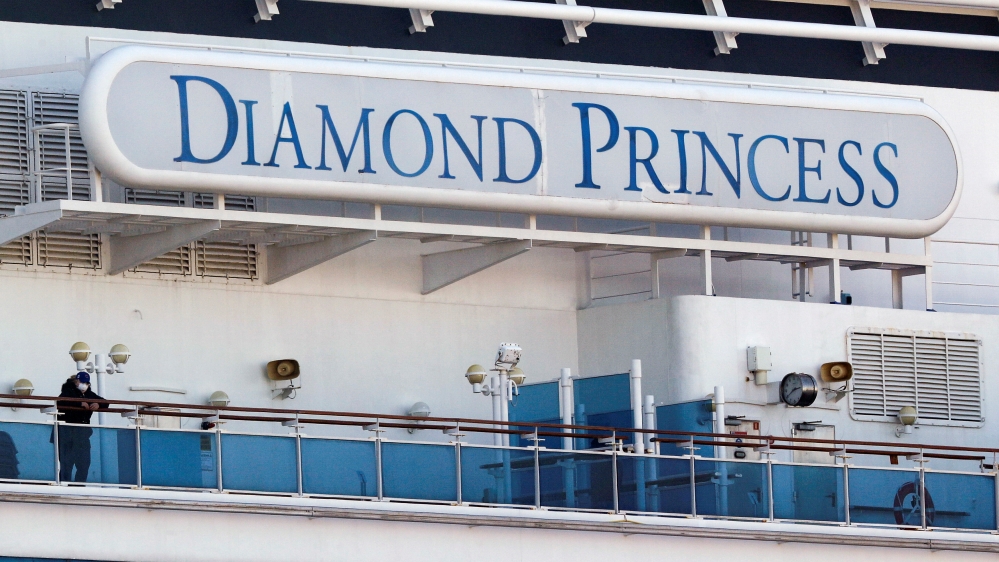 A passenger wearing a mask stands on the deck of the cruise ship Diamond Princess, as the vessel’s passengers continue to be tested for coronavirus, at Daikoku Pier Cruise Terminal in Yokohama, south of Tokyo, Japan on February 13, 2020.

The government of Hong Kong will send aircraft to Japan to bring back some 330 of its residents from the quarantined cruise ship Diamond Princess.

In a statement late on Saturday, the Security Bureau said chartered flights would return Hong Kong residents to the city for free once Japanese authorities had confirmed the plan.

The passengers will be required to undergo a further 14 days of quarantine after arriving in Hong Kong, the bureau added.

The cruise liner’s quarantine is set to end on Wednesday.

The death toll from a coronavirus outbreak in mainland China has reached 1,665 as of the end of Saturday, up by 142 from the previous day, the country’s National Health Commission said.

Across mainland China, there were 2,009 new confirmed infections on Saturday. The figure amounts to a drop in new cases for the third straight day.

The total accumulated number so far has reached 68,500

The operator of MS Westerdam called for more tests to confirm that an American passenger from the cruise ship has the new coronavirus after she tested positive in Malaysia.

The 83-year-old woman was the first passenger from the MS Westerdam, currently docked in Cambodia, to test positive for the virus. She had flown to Malaysia on Friday along with 144 others.

“While the first results have been reported, they are preliminary at this point and we are awaiting secondary testing for confirmation,” Holland America said in a statement.

Cambodian authorities called on Malaysia to review its test results.

The number of deaths from China’s coronavirus epidemic surged past 1,600 after 139 more people died in hard-hit Hubei province, the epicentre of the outbreak.

In its daily update, the province’s health commission also reported 1,843 fresh cases – the third day that reported new infections declined in the province.

At least 1,662 people have now died from the outbreak that first emerged in Hubei’s capital, Wuhan, in December and spiralled into a nationwide epidemic.

Find out more or adjust your settings.

This website uses cookies so that we can provide you with the best user experience possible. Cookie information is stored in your browser and performs functions such as recognising you when you return to our website and helping our team to understand which sections of the website you find most interesting and useful.

Strictly Necessary Cookie should be enabled at all times so that we can save your preferences for cookie settings.

If you disable this cookie, we will not be able to save your preferences. This means that every time you visit this website you will need to enable or disable cookies again.