With 74 confirmed cases and three deaths, Australia is far from making the top of the countries worst-affected by the new coronavirus. But thousands of shoppers seem to think otherwise, and it appears their worst fear is finding themselves stuck in the toilet without a square to spare.

Panic-buying increased across Australia this week amid fears that the outbreak will accelerate, leaving families trapped inside their homes with limited supplies.

On Saturday, inside a Melbourne Woolworths supermarket, canned goods and other food items remained in stock while toilet paper shelves were completely bare, despite the store rationing the number each shopper could buy.

“People are so ridiculous!! It’s no worse than flu season yet they’re acting like it’s the zombie apocalypse,” said shopper Karen Ficheroux.

Beginning in February, the Australian Department of Health has steadily increased restrictions on travellers returning from mainland China, Iran and South Korea – the countries worst hit by COVID-19 – with returnees required to “self isolate” for 14 days and seek medical attention if any symptoms appear.

The same applies to anyone who has been in close contact with an infected person, the department advises on its website.

In Sydney’s northern suburbs, where cases have been confirmed at a school, a hospital, a care home and a child care centre within a four-kilometre radius, 117 people have been placed in isolation while hundreds of others have been advised to stay at home, avoiding all contact with the outside world.

The new restrictions have fuelled a rush on “essential” supplies.

Back in the Woolworths store, as two employees emerged with a full pallet of toilet rolls, shoppers rushed to grab their pack.

A shop assistant guarding the new stock said, “We’ve had to limit one pack per family. It’s crazy.” 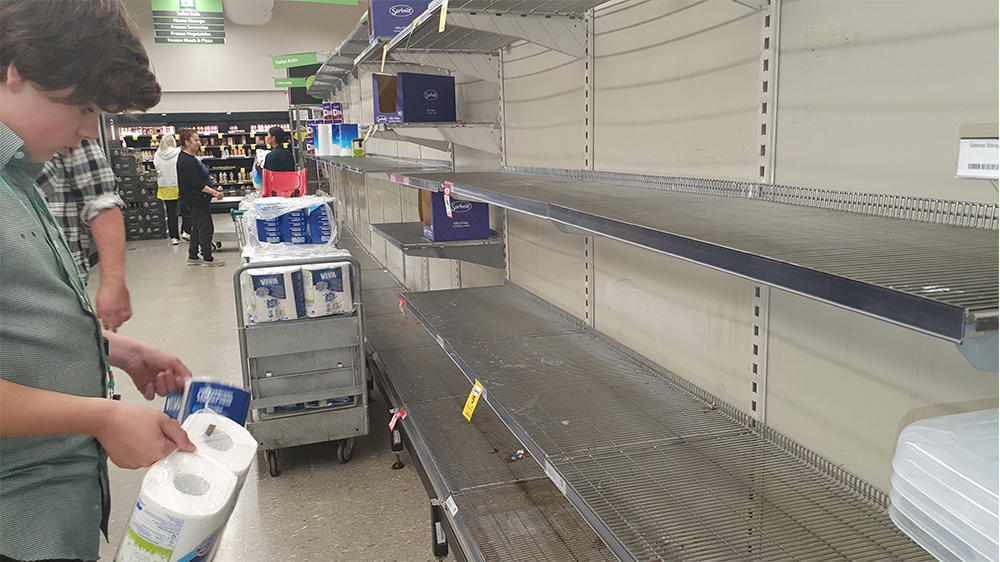 Shoppers in this supermarket found the toilet roll aisle all but empty.

Walking proudly with a multi-pack under her arm, one shopper could be overheard on the phone bragging excitedly, “I managed to get toilet paper!”

Other products, such as sugar, rice, nappies and cat litter, while not sold out, were running low.

“We’re talking about a virus which is a biological contagion, but what’s happening [as a result] is social contagion where you sort of catch what other people are doing,” said Jill Klein, Professor of Marketing at Melbourne Business School.

The bulky size of toilet roll packs compared with smaller items like canned goods – coupled with the sensitive nature of being caught without – has fuelled the rush on toilet paper above other more essential items.

“When you’re in the grocery store, and you see people with carts full of toilet paper, you think ‘I better get some toilet paper’,” Klein said.

“And when the shelves are empty, people think ‘Oh my gosh, there’s no more toilet paper in Australia’.”

Social media is now packed with images of empty shelves, shoppers squabbling over packets and memes of Australians wrapped up in toilet paper like mummies or barricading themselves behind a wall of toilet rolls.

The hashtags #toiletpapergate and #toiletpapercrisis have been trending since Wednesday, while regional newspaper NT News even printed Thursday’s edition with toilet paper sheets as a pull-out centre spread.

YES, WE ACTUALLY DID PRINT IT #toiletpapercrisis pic.twitter.com/jusP50ojYu

Offices and public facilities have complained of toilet paper theft, and online marketplace Gumtree saw dealers asking for as much as 2,000 Australian dollars ($1,329) for a pack.

“Treat yourself with Rare collectable item, sealed (and never used of course) … NO TIME WASTERS PLEASE,” wrote one user asking 50 Australian dollars for a nine-pack.

But the online toilet humour has further fuelled the panic.

“It’s the same psychology as bank runs during a recession … Sometimes these things are fads, but I would think that the more scared people get, the more this is going to happen,” Klein said.

“On the other hand, at some point everyone will have stocked up on all the toilet paper they think they’d need. If you’re a toilet paper company, you better expect a future slump in sales,” she added with a laugh.

On its Facebook page, Kleenex Australia assured customers it was “working around the clock” to keep supermarkets stocked.

Next to an image of a warehouse full of supplies they posted: “As you can see we won’t be running out any time soon.”

But Australia is not the only country that has been hit by panic buying.

Three knife-welding men in Hong Kong held up a delivery truck and made off with 600 toilet rolls last month.

“Hong Kong got pretty crazy and there was panic buying for a period and there was even some theft, but nothing like what seems to be happening in Australia,” said Robert Burton-Bradley, an Australian journalist working in Hong Kong.

“People were stripping shelves of staples like toilet paper and rice for a few weeks, but when the sky didn’t fall in, it all went back to normal pretty quickly.” 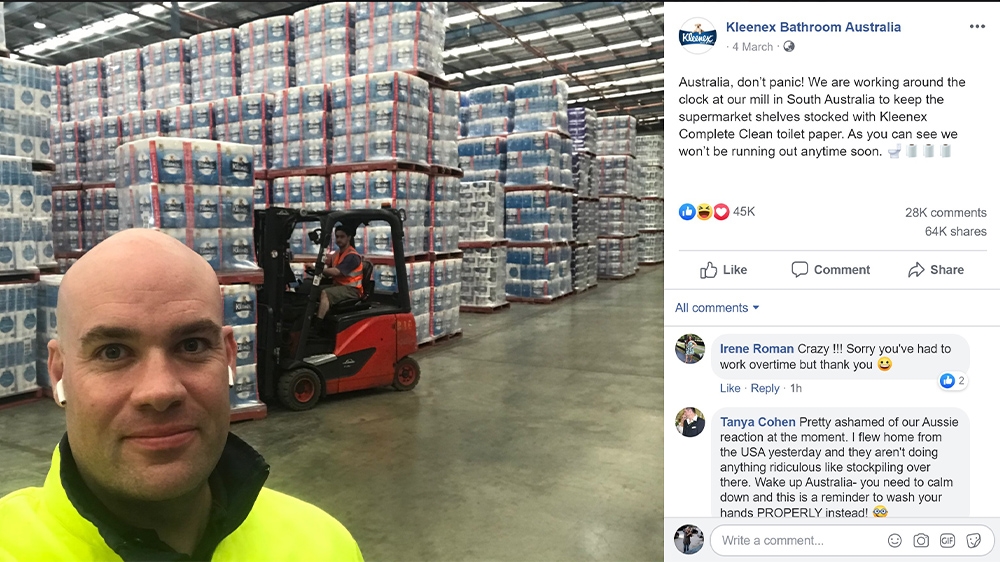 Mass buying of toilet paper and other items has also been reported in the US and Canada.

But David Savage, behavioural economist at the University of Newcastle said what is happening is not really panic buying.

“It’s actually fairly rational in a sense,” he said, adding that while many people were clearly buying more than they need and causing a shortage, “the motivations behind it are actually pretty clear.”

“We have seen around the world that there are places where they’re running out of stuff,” Mr Savage said adding that the images of others buying up here in Australia get people thinking that if they don’t do the same they will miss out.

But Savage said the real problem was not the run on toilet paper.

“People are also buying things that they shouldn’t be, like masks, medications, gloves, which are actually causing major problems,” he said.

“Not having a couple of extra weeks supply of toilet paper is inconvenient, but doctors not having access to the proper materials to treat people who actually have the virus – well, that’s when we really put ourselves at risk.” 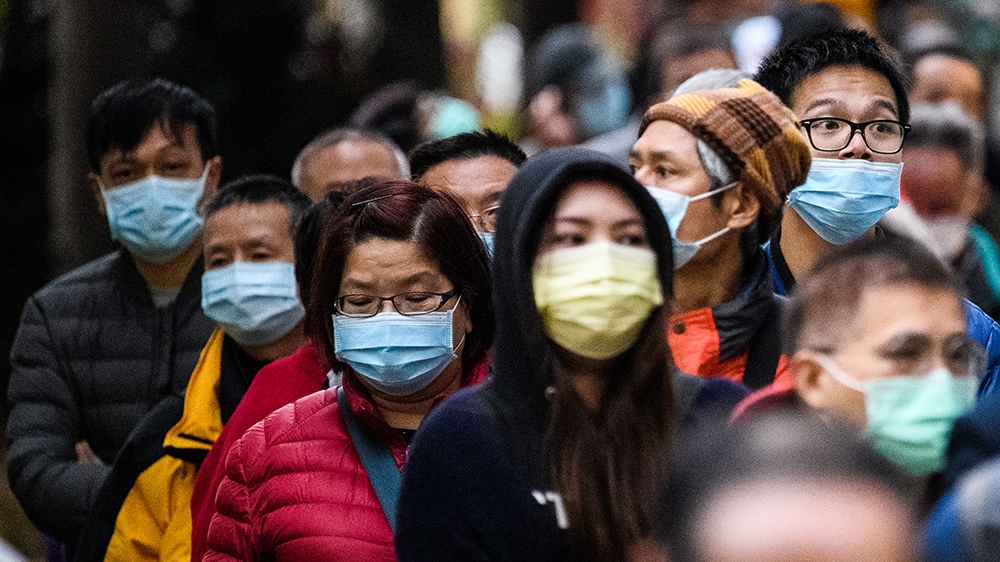 State authorities have assured people that those in quarantine will receive “practical support”.

According to the Queensland Health website, this includes “organising the delivery of items such as groceries, access to educational materials, replacement of medications etc”.

“Treat quarantine as an opportunity to do some of those things you never usually have time for, such as board games, craft, drawing and reading,” the website advised.