Marjorie Reyes, an engineer, had to go home when her company in Zhuhai, China suspended operations in January over the coronavirus pandemic, now in at least 114 countries around the world.

While her company has resumed operations, Reyes remains stuck in the Philippines, unable to return because of Manila’s travel restrictions to China. She is one of a growing number of Filipino workers stranded at home by a wave of travel bans from Asia to the Middle East and fears her job might be at risk.

“We are worried about being replaced,” she said. “I don’t know if they can wait for us.”

The outbreak now threatens to leave tens of thousands of workers reliant on jobs overseas stranded and disrupt the flow of remittances.

Earlier this week, Kuwait and Qatar announced temporary entry bans on travellers from the Philippines. Kuwait reported at least 72 infections and Qatar 262 on Thursday.

Philippine Overseas Employment Agency head Bernard Olalia said on Monday up to 3,000 Filipinos were immediately affected by the bans, with some Qatar-based workers forced to turn back after boarding planes to Doha.

The Philippines has reported 49 cases of COVID-19, with two fatalities as of Thursday. Of the 49 cases, 46 have been confirmed this week.

Schools and offices in the metro Manila area have been temporarily closed and mass gatherings have been cancelled since President Rodrigo Duterte declared a public health emergency on Monday.

“They should not be forced to pick between their health and safety and their livelihood,” she said. “All of them matter.”

Many Filipinos may not have that choice.

Both bans are likely to remain in place in the near future and will probably be followed by bans from other countries, which would significantly affect the Philippine economy, said Emmanuel Geslani, a Manila-based recruitment consultant.

“It’s very difficult for the government to know what is the next country who will ban them,” Geslani said.

Most Filipinos in the Middle East are women working in the medical and service sectors. Some are single mothers, Concepcion said. 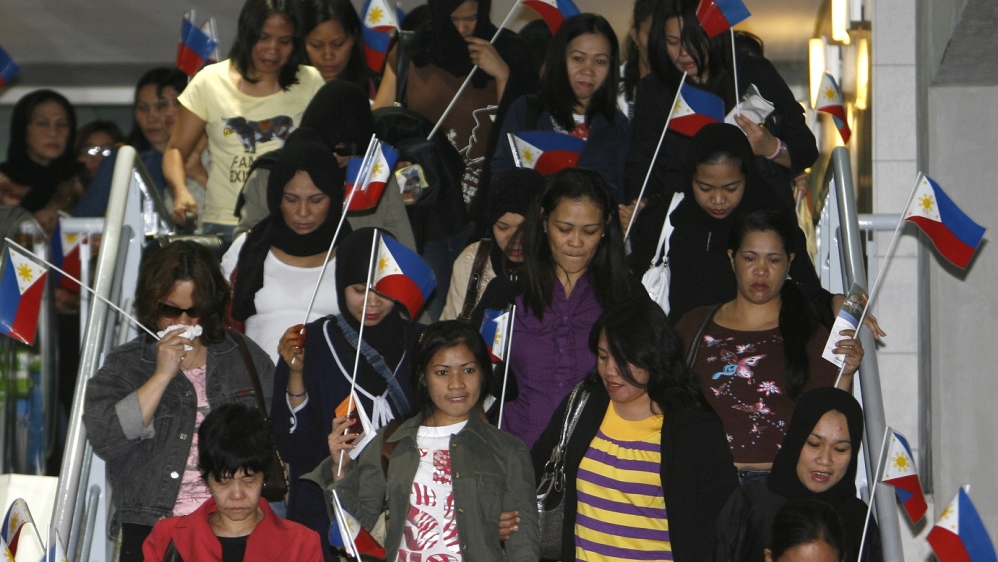 “They would be the only breadwinner of their family,” she said. “If that is taken away, it would really have a big impact.”

Saudi Arabia says it will exempt Filipinos working in healthcare in the country from the travel ban.

More than 100,000 Filipinos reside in Italy, which announced a nationwide lockdown on Monday due to the coronavirus.

About 120,000 Filipinos work on cruise ships around the world and their jobs could be under threat as the virus cripples the industry, Geslani said.

No help at home

Philippine authorities have downplayed the threat of the coronavirus despite growing criticism over Duterte and the health department’s slow response to the outbreak.

On Monday evening, Duterte said the Philippines had the money to combat the outbreak and promised to repatriate Filipinos from anywhere in the world during a news briefing in which he repeatedly coughed and joked he had the coronavirus. 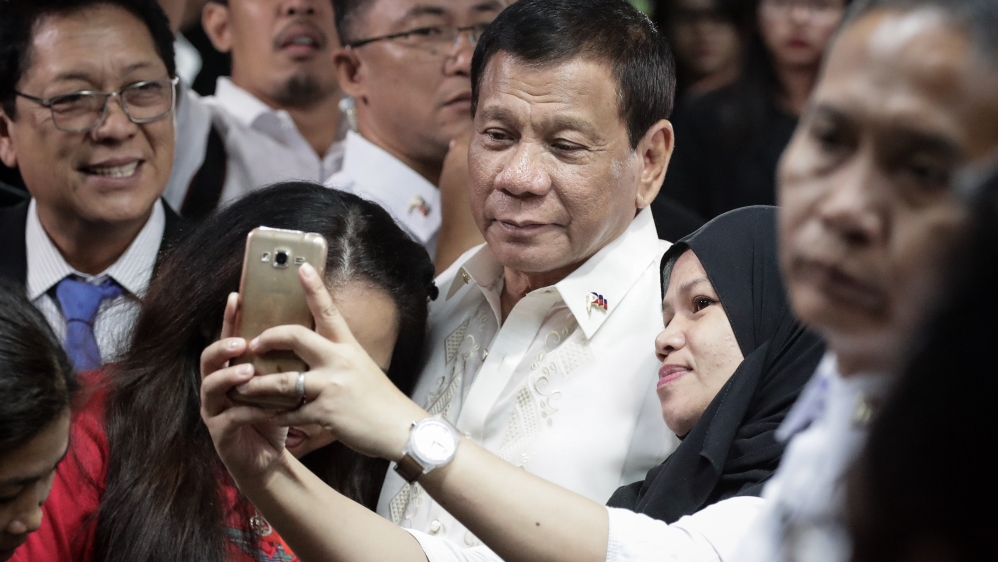 President Duterte poses for selfies with overseas Filipino workers at the Manila airport following his state visit to Saudi Arabia, Bahrain and Qatar in 2017

But workers who cannot return to their jobs or are stranded abroad say they have received little help from the government.

At the height of the quarantine of the virus-stricken Diamond Princess cruise ship in Yokohama, Japan, Filipino crew members continued to work. At least 80 Filipinos workers were later infected with the virus.

Five hundred and eighteen Filipino staff are under quarantine on board the MV Grand Princess, docked in the United States, after a passenger from a previous trip died from the coronavirus. The Philippines is currently seeking a self-isolation site for them. At least six Filipinos aboard the cruise ship have so far tested positive for the virus as well.

The government “could have been more proactive in removing them,” finding quarantine sites, or providing assistance while they were abroad, Concepcion said, “but they received nothing until they were repatriated back to the country.”

Workers barred by the Philippines from travelling to China are entitled to subsidies of 10,000 Philippine pesos ($198). The government payments were earlier extended to workers unable to return to their jobs in Hong Kong and Macau before the Philippines lifted travel bans to those territories.

The Overseas Workers Welfare Administration (OWWA), responsible for distributing the payments said it had not yet decided on giving similar handouts to workers unable to travel to Kuwait and Qatar.

“For financial assistance, no policy has been issued yet,” Jay Tevez, advocacy and social marketing officer at OWWA said. 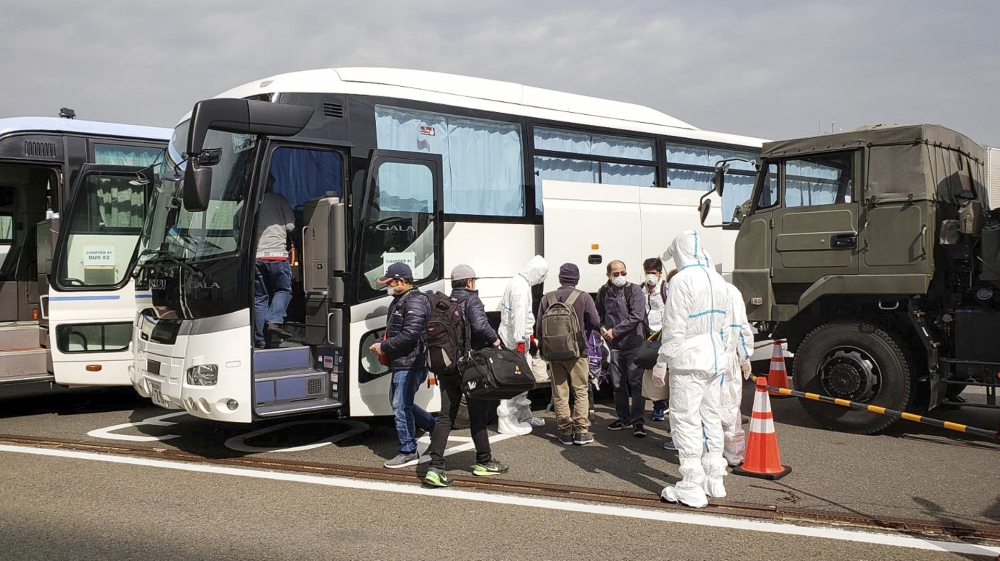 At present, the agency is evaluating “what other assistance we may give to affected workers, particularly those going to Qatar and Kuwait,” Tevez said.

But workers who have received the subsidy say it cannot make up for their financial losses.

Rod Cruz, who intended to take up an engineering job in Shenzhen before the travel ban said he would be covered by health insurance at work but would face expensive medical bills in the Philippines should he or a family member get sick.

The same fate could befall Kuwait or Qatar-bound workers now without either their overseas health insurance or salaries.

“We have different destinations [but] our conditions would still be the same,” Cruz said. “Whatever we are experiencing, they will also experience.”

The economic fallout of the coronavirus could hit the Philippines hard because it relies heavily on foreign-worker remittances –  but workers within the country could also be affected.

Call centres within the Philippines which serve mostly American companies and employ more than one million Filipinos could also be under threat.

Officials have called on the labour department to provide unemployment benefits to those unable to work due to the coronavirus.

Concepcion said the government should either provide financial subsidies or alternative jobs but no long-term stimulus plan has yet been put in place to ease the woes of foreign workers.

For Reyes, who works in Zhuhai, the solution is simple. “They need manpower,” she said. “We are just asking to be allowed to go back.”

Start your Work at Home business right now for less than the price of an overpriced cup of coffee. Click for details.

The pace of startup layoffs may be slowing down