The death toll from a new coronavirus epidemic in mainland China surged past 1,500, as France reported the first death outside of the Asia-Pacific region.

Chinese Foreign Minister Wang Yi acknowledged that the virus, known as COVID-19, was a significant challenge but defended Beijing’s management of the epidemic and lashed out at the “overreaction” of some countries.

His comments came a day after those returning to the Chinese capital from extended Lunar New Year holidays were ordered to quarantine themselves for 14 days.

More than two dozen countries have confirmed cases and several have suspended trade and travel links with China in a bid to contain the spread of the virus.

Four deaths have been recorded outside mainland China – in Hong Kong, Philippines, Japan and the most recent in France.

Fashionistas sported face masks and clutched their hand sanitisers at a London Fashion Week that is facing disruption due to the coronavirus outbreak.

Some designers have been unable to get their garments out of China, while Chinese models, journalists and influencers have been affected by travel bans.

Toyota to resume China output at three plants next week

Toyota Motor Corp said it plans to resume output at three of its four main car plants in China next week.

The resumption of production had initially been slated for February 3 following the Chinese Lunar New Year holidays, but was delayed because of the new coronavirus outbreak in China.

Operations at Toyota’s plant in Changchun, Jilin province, and another plant in Guangdong province, will restart on Monday, while a factory in the northern Chinese port city of Tianjin will resume operations on Tuesday, Toyota said.

Business, but not as usual, at Singapore Airshow

Normally, suppliers and customers attending the Singapore Airshow would be discussing cutting-edge technologies and networking in the hope of making multi-million-dollar deals.

But this year the event opened under the shadow of the deadly coronavirus outbreak. 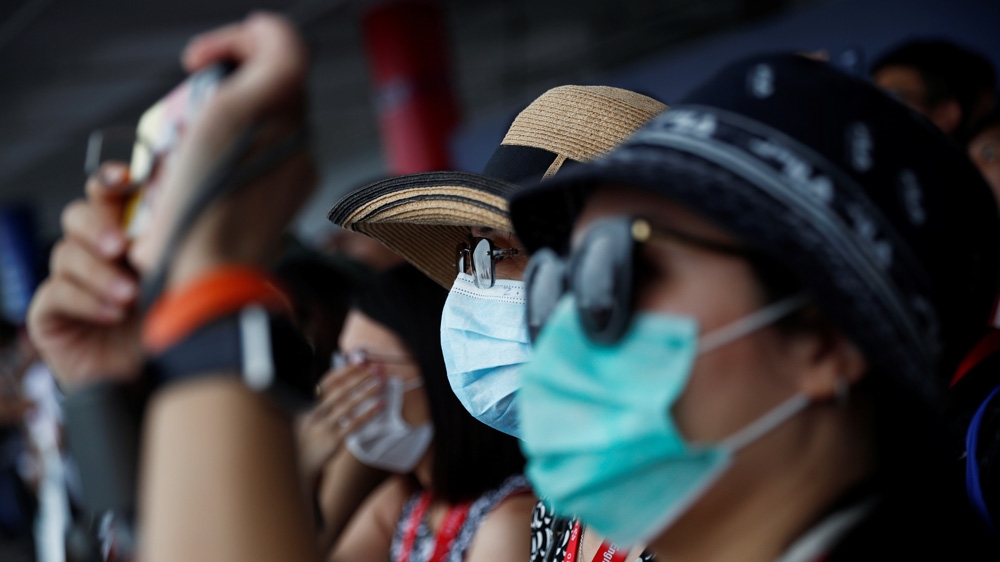 Spectators still came out to enjoy the aerial displays, albeit wearing masks

China’s government told local authorities to allow companies involved in feed production and poultry slaughtering to resume work as soon as possible and overcome disruptions caused by the coronavirus outbreak.

Local authorities should ensure transport runs smoothly between cities and the countryside and should provide tax rebates, low interest rates and other financial support to help the companies, Chinese state planner, agriculture and transport ministries said in a joint statement.

The ministries said the support was needed to ensure the industry’s basic production capacity would not be undermined and to guarantee the effective supply of meat, eggs, milk and other products to consumers.

Eight of the nine people diagnosed with coronavirus in the US have left hospital having now tested negatively twice for the virus, NHS England said.

“I want to stress that any individuals who are discharged from hospital are now well and do not pose any public health risk,” said Health Secretary Matt Hancock.

The last of the guests staying at Arrowe Park after returning from China have now left the hospital. Read the latest update from NHS strategic incident director, Professor Keith Willett. #Coronavirus https://t.co/n3yIp02lSF pic.twitter.com/95jClCIZ2m

The final person is still being treated at Guy’s and St Thomas’s Hospital in central London.

All 94 people who were quarantined at Arrow Park hospital in north west England after being evacuated from Wuhan have now left the site but more than 100 people are still in quarantine in a hotel north of London after arriving from China last week.

Malaysia has said that an 83-year-old US passenger on a cruise ship that docked in Cambodia has tested positive for the new coronavirus.

The woman took a flight to Malaysia on Friday from Cambodia, the Malaysian health ministry said in a statement, adding that her husband had tested negative.

The Westerdam, operated by Carnival Corp unit Holland America Inc, docked in the port of Sihanoukville, Cambodia, on Thursday after being shunned by several countries over fears that passengers could be carrying the virus.

WHO chief says coronavirus still an emergency for China

The coronavirus outbreak is still an emergency for China and it is impossible to tell where the epidemic will spread, Tedros Adhanom Ghebreyesus, director-general of the WHO, said.

Tedros told the Munich Security Conference in Germany he was encouraged by actions China had taken to slow the spread of the virus but was still concerned about the increasing number of cases.

An elderly Chinese tourist hospitalised in France has died from the new coronavirus, the first fatality confirmed in Europe and outside of Asia, French health minister said.

Agnes Buzyn said she was informed on Friday that the 80-year-old man – in hospital in northern Paris since January 25 – had died of a lung infection due to the coronavirus. His condition “had deteriorated rapidly” after several critical days, she said.

Hundreds of protesters marched in multiple Hong Kong neighbourhoods against the government’s plan to potentially turn some buildings into coronavirus quarantine centres, demanding full closure of the border with mainland China.

China is currently running more than 80 trials for treatment of the novel coronavirus, according to the World Health Organization (WHO).

Speaking at the Munich Security Conference, Michael Ryan, director of the WHO’s Emergencies Programmes called on nations around the world to work with Beijing to fight the virus.

“There are 82 different trials under way in China right now – everything from traditional medicine all the way through to anti-HIV drugs and that’s in collaboration with the the external scientists and investigators,” Ryan said.

“Some of these trials will have results in two to three weeks,” he added. 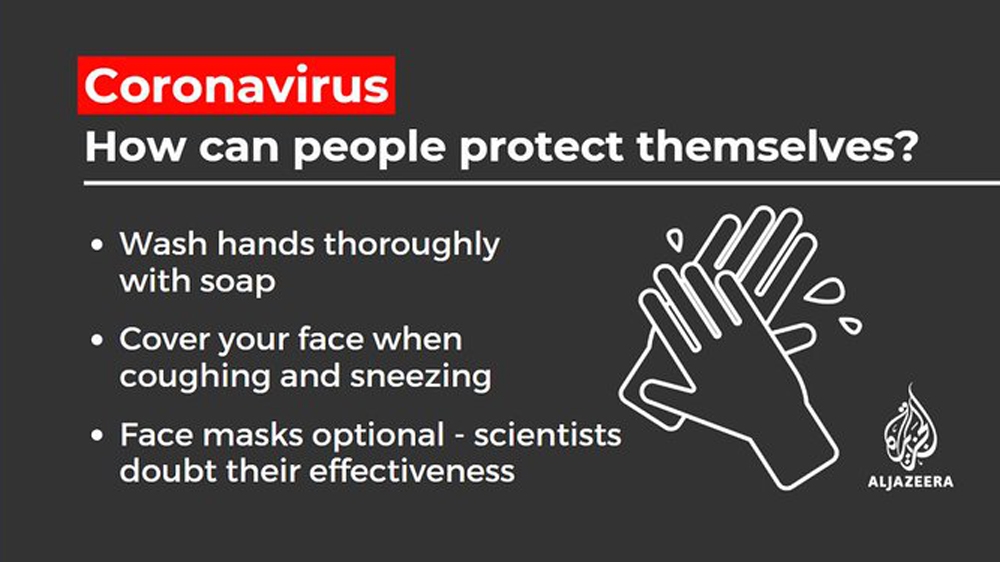 Another 67 people tested positive on cruise ship in Japan

Sixty-seven more people on board a cruise ship quarantined off Japan’s coast have tested positive for the new coronavirus, the country’s health minister said.

The new cases, from 217 tests, bring the number of people diagnosed on the Diamond Princess, docked in the Japanese port city of Yokohama, to 286, including a quarantine officer who contracted the illness.

We understand there are many questions around upcoming cruises in Asia. We appreciate your patience with us, as we take care of the health and well-being of our guests and crew onboard #DiamondPrincess, and handle the evolving travel restrictions and port closures in Asia.

China confident epidemic will be over soon: Minister

China is confident the coronavirus epidemic will be over soon and that the subsequent economic impact will only be temporary, Qin Gang, China’s vice minister of foreign affairs said.

“The impact of the epidemic on the Chinese economy will be short term and temporary,” he said at the Munich Security Conference.

“When the epidemic is over, the subdued consumer demand will be released rapidly and the economy will rebound strongly,” Qin added.

US to evacuate citizens from cruise ship in Japan

The United States government is preparing to evacuate American citizens aboard the Diamond Princess cruise ship, which has been quarantined at Japan’s Yokohama port since early February, the US embassy said.

Washington plans to send a chartered plane to Japan for the evacuation on Sunday, it said in a letter to US citizens on board.

The evacuees will be required to undergo a further quarantine of two weeks following their arrival in the US, the letter said.

“We understand this is frustrating and an adjustment, but these measures are consistent with the careful policies we have instituted to limit the potential spread of the disease,” it added. 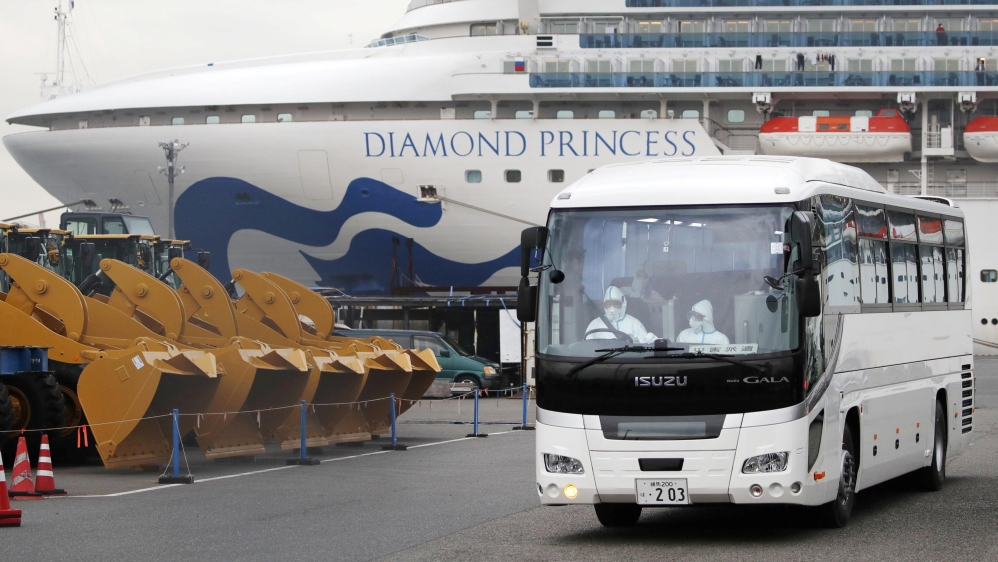 Thailand has recorded one new case of coronavirus, bringing the total in the country to 34 since January, a health ministry official said.

The new case is a 35-year-old Thai female medical worker, who was infected through contact with a patient, Suwanchai Wattanayingcharoenchia, director-general of the Department of Disease Control, told a news conference.

Fourteen patients in Thailand have recovered from the infection and returned to their homes.

Coronavirus epidemic at ‘most critical moment’

Liang Wannian, a senior official at China’s National Health Commission, said the COVID-19 epidemic in the country was “at the most critical moment or in a state of stalemate confrontation”.

Speaking in Wuhan, the epicentre of the outbreak, Liang said it was a good sign that the number of confirmed cases in all provinces except Hubei have been on the decline for the past 10 days. Hubei, of which Wuhan is the capital, has been the most hard-hit by the virus.

Wang Hesheng, the new top health official of Hubei province, said Wuhan will build more field hospitals to take on all the confirmed and suspected cases. So far, Wuhan has built nine field hospitals with over 6,900 beds, he said.

Chinese gymnasts pull out of World Cup in Australia

The Chinese gymnastics team has pulled out of next week’s World Cup in Melbourne due to Australian government travel restrictions put in place to limit the coronavirus outbreak.

Canberra extended restrictions on foreign nationals travelling from China for another week on Thursday, effectively ruling out China’s participation at the February 20-23 World Cup, which offers qualifying points for this year’s Tokyo Olympics.

“It has been a very challenging few weeks for us all, but none more so than for the Chinese gymnasts and officials who have been training and preparing to come to Melbourne,” Gymnastics Australia CEO Kitty Chiller said in a statement.

Citing the Chinese Gymnastics Association, Chiller said the delegation from China “are well and have shown no sign of infection” but “despite this, we all have to respect the Australian Government’s travel restrictions”.

No ‘Plan B’ for Tokyo Olympics

Tokyo Olympics organisers and the International Olympic Committee (IOC) said there is no “Plan B” for the 2020 Games, which open in just over five months and have been jolted by the coronavirus outbreak in neighbouring China.

“Certainly the advice we’re received externally from the WHO [World Health Organization] is that there’s no case for any contingency plans or cancelling the games or moving the games,” he added.

China’s National Health Commission said the death toll from COVID-19 had reached 1,523 in the mainland as of the end of Friday, up by 143 from the previous day.

All but four of the deaths were in Hubei, where some 56 million people remain under quarantine.

Across mainland China, there were 2,641 new confirmed infections on Friday. The total accumulated number so far has reached 66,492.

A man who visited Hawaii was confirmed to have coronavirus when he returned home to Japan, according to officials in Hawaii.

Health officials were tracking down details about his travel in the US island chain, including his flight information and people with whom he had close contact.

The man was in Hawaii January 28 to February 7 and had cold-like symptoms during his last few days there, said Hawaii Health Director Bruce Anderson. He only developed more serious symptoms when he returned to Japan, where he tested positive for the illness, Anderson said.

Because of when his symptoms began, officials believe he became infected in Japan or while in transit to Hawaii, said state epidemiologist Dr Sarah Park.

“Our focus at this point is to try and understand who potentially this person may have had close, prolonged contact,” Park said, adding that they’re concentrating on his whereabouts while on the island of Oahu because that is where he developed symptoms.

Death toll in China surges past 1,500

The province’s health commission also reported 2,420 new cases of the COVID-19 strain, about half the number from the previous day.

This Interactive Map Tells You Which Countries Are Open for Travel

Keep Squirrels Out of Your Bird Feeder With Cayenne