Working long, intense hours, Liu was one of the first healthcare workers to come to the front line to fight the coronavirus outbreak that has killed at least 1,770 people and infected 70,548 others in mainland China.

For days, she helped dispense medicine and administer intravenous therapy to infected patients at a crowded hospital in Wuhan, the epicentre of the epidemic.

Then on January 26, just three days after Wuhan was placed under a lockdown, she developed a dry cough and started to get a fever.

Liu could not remember exactly how and when she might have contracted the virus. But by the time she had received her test results, her body temperature had been hovering above 38.5 degrees Celsius (101.3 Fahrenheit) for over four days.

“When I was admitted to the hospital, a colleague of mine burst into tears and said she was so scared and so tired,” said Liu, who asked Al Jazeera to identify her only by her last name.

“At that time, we already had at least 150 colleagues who had either confirmed or suspected to have been infected – we’re all very scared.

“Every time someone comes into the ward, I’d try to hold my breath and not talk, because I’m afraid that the virus would spread that way,” said Liu.

“Getting them infected is the last thing I want to do now.”

For the first time since the beginning of the coronavirus outbreak, China’s National Health Commission reported on February 14, that at least 1,716 health workers had been infected while treating patients with the virus. This has raised concerns about the capability of the government to protect the caregivers in direct contact with the afflicted.

Zeng Yixin, the deputy director of China’s health commission said during a news conference on Friday that infected medical workers comprise 3.8 percent of all those who have contracted the virus across the country.

He told the public the number would not rise as China was increasing its efforts to ensure that supplies of protective equipment for medics would be adequate. However, the high number of coronavirus deaths in China has already set off warning bells in the medical community. 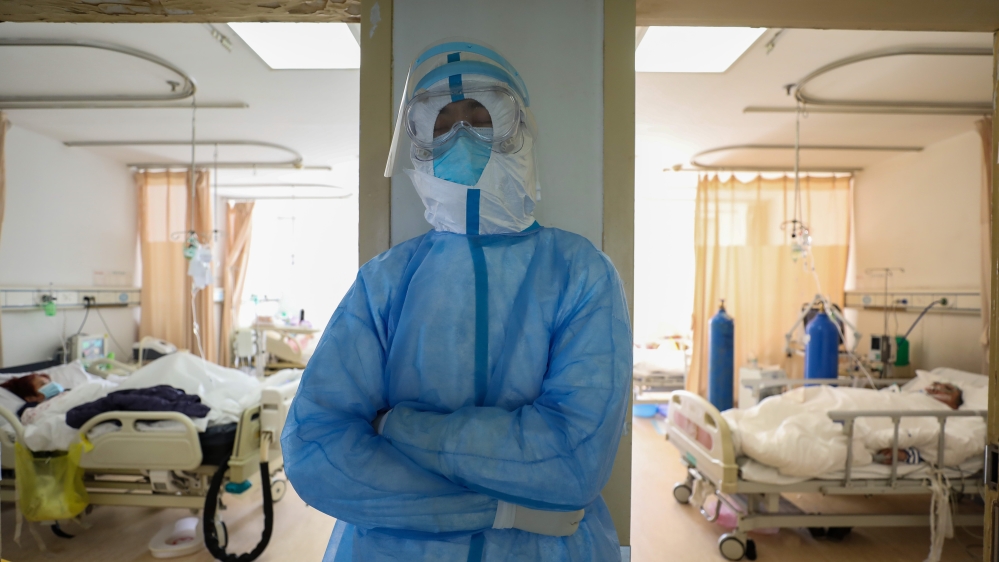 “1,700 is a very large number and shows healthcare workers are at clear risk of infection elsewhere in China and globally,” Tom Inglesby, the director of Johns Hopkins SPH Centre for Health Security, wrote on social media.

But this is not the first time that medical workers in China have been left vulnerable before.

During the Severe Acute Respiratory Syndrome epidemic in 2002 and 2003, a significant proportion of healthcare workers in mainland China also succumbed to the virus with about 20 percent of them contracting SARS.

“If we can’t protect those who are helping us at literally the worst place possible during this battle, then what good are we?” one netizen wrote on Weibo, China’s equivalent of Twitter after the numbers came out.

Despite reports that medical equipment suppliers have resumed work to aid the government’s fight against the disease, doctors and nurses have continued to report severe shortages of medical supplies, especially masks and hazmat suits.

A doctor who had contracted the virus 11 days ago and works at Wuhan Central Hospital told Al Jazeera that doctors and nurses in his hospital lacked most of the protective gear needed.

“We are pretty much ‘naked’ in the biohazard environment,” the doctor who requested anonymity said. “It’s getting better than the first few days, of course, but the needed medical supplies are still in shortage.”

Because of the lockdown, the entire country has been brought to a near standstill, with deliveries of goods and medical supplies to Wuhan also affected.

Volunteers have also expressed frustration over their donations not getting to Hubei.

As a result, medical workers are exposed to more risk of getting infected, due to the lack of protective gear.

“The initial cover-up of the outbreak by the Chinese government has directly contributed to the large number of healthcare workers infected,” Yanzhong Huang a senior fellow for global health at the Council on Foreign Relations.

“Coupled with the lack of medical supplies, we have the unfortunate large number of medics being infected.” 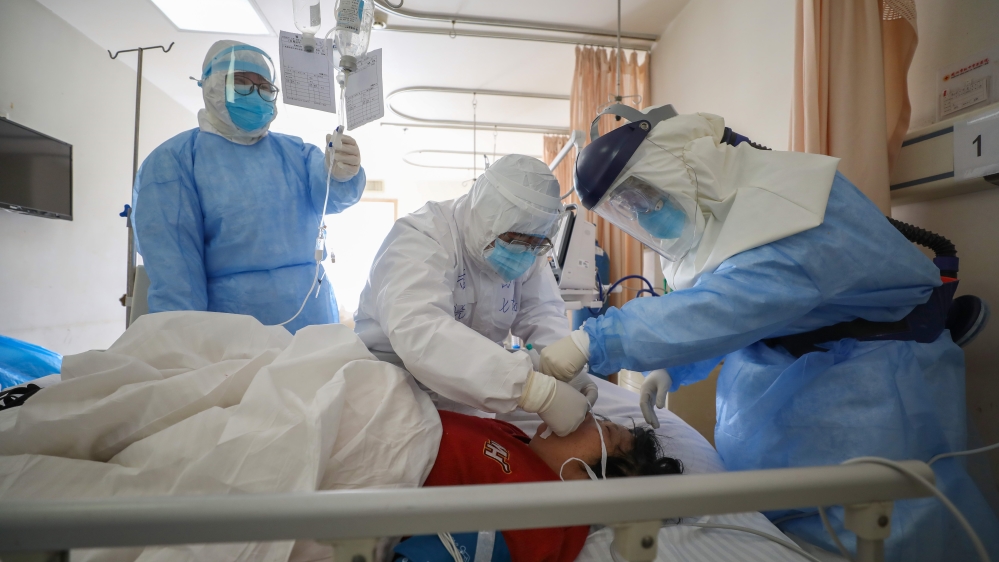 There are more than 170,000 healthcare workers, including 20,000 doctors, battling the coronavirus outbreak in China

Li Wenliang, one of the whistleblowers whose death sparked national grief and outrage, for example, contracted the virus while he was treating a then-infected glaucoma patient while not wearing any protective gear.

Additionally, the lack of rest and long hours are putting the health of these hospital staff in jeopardy.

There are currently more than 170,000 healthcare workers battling the coronavirus outbreak, including the more than 20,000 doctors and nurses sent from across the country to Hubei.

And health workers in Wuhan are finding it difficult to cope with the sheer numbers as the cases grow exponentially.

“People’s immune system will be compromised if the body is not well-rested, and frankly, the majority of the medical workers are working too much for them to be able to cope with such a high level of intensity of medical care,” Zhou Liqiang, a doctor at the First Affiliated Hospital of Chongqing Medical University, said.

Front line healthcare workers are also actively isolating themselves from their families for the fear of spreading the virus.

Wu, another nurse who works in the same hospital as the infected nurse, Liu, and is also helping treat her colleague, told Al Jazeera that she had not gone back home for more than two weeks now.

“I now live in a hotel close to the hospital, because I can’t in good conscience go back home and risk spreading the virus to my two-year-old daughter,” Wu said on the phone, before having to hang up to treat another patient.

“Thanks to the generosity of the hotel owner, I don’t have to pay for the accommodation,” said Wu, who also asked that she be identified only by her last name.

“A multisystem disease: How coronavirus affects the entire body – KSL.com

Parts of U.S. scramble to shut down as country breaks another daily coronavirus record – CBS News